TONIGHT! Friday, February 24 I Jack Dishel: Party of One  Jack Dishel is best known as a songwriter and musician, touring all over the world performing as Only Son and also playing lead guitar in The Moldy Peaches. This year he has literally exploded onto the comedy scene, doing a two month run of hour-long shows at the Sidewalk Cafe – without ever repeating material. It’s sometimes hilarious, sometimes dark, but always interesting. Dishel has the unique ability to keep an audience engaged the entire time they’re in a room. Whether speaking as one of his many characters or in his own voice, his ideas come through loud and clear. It’s a fast hour. This show at the PIT marks a big step for Dishel – bringing the drunken night club insanity into a theater.  Let’s see what happens END_OF_DOCUMENT_TOKEN_TO_BE_REPLACED

Posted by The Brown Paper Blog on February 24, 2012 in Hot Tickets, New York 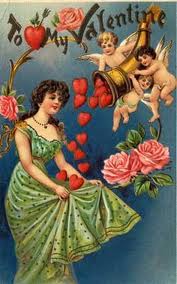 Valentine’s Day is almost upon us, and it’s time to start making plans for the most romantic of all holidays. Whether you think it’s a phony, Hallmark holiday or see it as a genuine opportunity to show that special someone how you feel about them, we got an event for you. There’s lots of burlesque, some great music, comedy, theater, roller derby, a pub crawl, a ghost tour of Grand Central Station and even a dance party in a Russian bath house! We even threw in a couple anti-Valentine’s Day events in there for good measure. Whether you’re in Anchorage or Brooklyn, I’m betting we got something in your neck of the woods.

There are still tickets available for all these events, so hurry up and pick some up before they’re all gone!

Counting on Love, and Other Stories of the Heart – San Francisco, California Treat Street Theatre Project, in partnership with The Playwrights Center of San Francisco, present six new plays by Rod McFadden and Don Samson. It’s an evening of laughter, heartbreak, compassion, compromise and human connection — the perfect Valentine’s Day gift. These award-winning plays are funny, sad, insightful and inspiring. Share them with someone you love, or someone you want to love you more. This show opens tonight and runs through Saturday, February 18.

VivaVoom Brr-Lesque Presents: Starlets & Harlots – Anchorage, Alaska  Comedy! Glitter! Live Music! Feathers! Aerial Daring! Fringe! Prizes! Striptease! Celebrate Valentine’s Day with more than cards or candy! VivaVoom Brr-Lesque offers their version of Silver Screen love that will have you and your date laughing, and “oooh”-ing in amazement. Of course, if you don’t have a date, it’s a GREAT Girls or Guys Night Out or bachelor/bachelorette party! This show also will be running on Saturday, February 11. END_OF_DOCUMENT_TOKEN_TO_BE_REPLACED

TONIGHT! Friday, February 10 I Goldie and The Hawns Presents: Boneless! A monthly dose of lady comedy. Come join The People’s Improv Theater as they celebrate some of NYC’s funniest women of Improv, stand-up and sketch! 100% funny, 100% HOT. Stand up by Michelle Wolf, Firth, Funkle Todd and Goldie and the Hawns featuring Ashley Ward!

TONIGHT! Friday, February 10 I “They Eat Scum” + “Goodbye 42nd Street”  Nick Zedd’s infamous Super 8 movie that inspired the Cinema of Transgression movement, “They Eat Scum” showcases the film movement’s intent to shock the viewer into reconsidering society’s structures. As Zedd himself put it: “If it’s not transgressive, it’s not underground. It has to be threatening the status quo by doing something surprising, not just imitating what’s been done before.”  Filled with surrealist imagery, B-movie aesthetics, and comedic absurdity, “They Eat Scum” illustrates the re-evaluation of amateur aesthetics that was the hallmark of No Wave Cinema. Screens with “Goodbye 42nd Street,” a profile of the diverse nature of 42nd street in 1986, this film contrasts this iconic street with surrealist scenes.  Capturing this iconic neighborhood just before its transformation during the Giuliani era, “Goodbye 42nd Street” is an artistic remnant of a bygone Manhattan. END_OF_DOCUMENT_TOKEN_TO_BE_REPLACED

Posted by The Brown Paper Blog on February 10, 2012 in Hot Tickets, New York

TONIGHT! Thursday, December 22 I Bing Faithful’s Very Merry Nondenominational Holiday Special  Veteran improviser Bob Kulhan (Second City, The Scene, founding member Baby Wants Candy) is Bing Faithful, a holiday crooner with a dark twist. The show also features many great, surprise guests from SNL, SC, BWC & The PIT! Moment’s before he is to take the stage with his band, The Bing Faithful 5, holiday crooner Bing Faithful learns all members of his band have died in a horrific bus accident on the way to the The PIT. Yet, Bing is a consummate professional and knows “the show must go on!” at all costs. What follows is one character’s journey through grief and agony as, alone on stage, he attempts to compensate for the bands absence by singing all 5 parts and harmonies to all the classic holiday songs, requested by the audience… and occasionally with the audience’s help! END_OF_DOCUMENT_TOKEN_TO_BE_REPLACED

Posted by The Brown Paper Blog on December 23, 2011 in Hot Tickets, New York

Picasso’s Birthday Party & Cancer Benefit at The Pit in NYC

Tomorrow, October 25th, is Pablo Picasso‘s 130th birthday. As most of you surely know, Picasso was a Spanish painter who co-founded the Cubist movement in the early part of the 20th Century. His full name was Pablo Diego José Francisco de Paula Juan Nepomuceno María de los Remedios Cipriano de la Santísima Trinidad Ruiz y Picasso, a name that pays homage to various saints and relatives and is quite challenging to say in one breath.

From an early age he had an interest in drawing. His father, Don José Ruiz y Blasco, was a painter who specialized in painting naturalistic portraits of birds and other game who felt that formal artistic training was important. So, from the age of seven, Pablo’s father trained him in figure drawing and oil painting. One popular story says that Picasso’s father discovered his son painting over his unfinished sketch of a pigeon at the age of thirteen and declared that his son had already surpassed him as an artist, whereupon he vowed to give up painting forever. When he was 16, his father enrolled him in the Royal Academy of San Fernando, Spain’s foremost art academy, but young Picasso disliked formal training and quit attending classes. END_OF_DOCUMENT_TOKEN_TO_BE_REPLACED

Every Friday at noon, EST, Brown Paper Tickets posts upcoming events happening in the New York area. Here are hot tickets for events coming up. Check back for stellar events that fit the interests of locals and tourists alike.

TONIGHT to Saturday, October 22 – The Exquisite Corpse Festival  Exquisite Corpse is a game where three collaborators create a single composition through a game of secrets and consequences. Three dance companies will share the stage to dance to a song by three musicians. The dance companies will be choreographed by Rachel Klein, Jessica Park, and Tracy Berlsey and will never have worked together before the dress rehearsal. The three choreographers will fully choreograph each of their parts, but opening night will be the first time they have ever danced together! The directors will share a cast to produce a play written by three playwrights. Award winning playwrights including John Patrick Bray, Stacy Davidowitz, and Anton Dudley have each written a third of a play without seeing each others’ work. The first time they will see the entire play for the first time is with you in the audience! Three tattoo artists will share one person’s body to create a tattoo without sharing their work. Sacred Tattoo is sending three of their best tattoo artists on opening night to give our volunteer a tattoo from their imagination (rather than the receiver’s request). You have to be there opening night to see it live, but we’ll have a photo exhibition of the work by Nick Pauly for the rest of the nights! Three taxidermists share parts of three animals to create a single corpse! What do you get when you mix a duck, rook, and a rabbit? You’ll have to show up to find out!

END_OF_DOCUMENT_TOKEN_TO_BE_REPLACED

Posted by The Brown Paper Blog on October 14, 2011 in Hot Tickets, New York

Every Friday at noon, EST, Brown Paper Tickets posts upcoming events happening in the New York area. Here are hot tickets for events coming up. Check back for stellar events that fit the interests of locals and tourists alike.

Posted by The Brown Paper Blog on September 23, 2011 in Hot Tickets, New York

Every Friday at noon, EST, Brown Paper Tickets will post upcoming events happening in the New York area. Here are hot tickets for events coming up. Check back for stellar events that fit the interests of locals and tourists alike.

Tonight, July 8 Goldie and The Hawns Presents: Boneless! is a monthly dose of lady comedy at the Peoples Improv Theater, featuring some of NYC’s funniest women of Improv, stand-up and sketch.

Tuesday, July 12 Crab Boil at Back Forty Restaurant is devoted to cracking, licking, sucking, smashing, hammering all the succulent flavors out of the mid-Atlantic’s most famous resident, the Blue Claw Crab. END_OF_DOCUMENT_TOKEN_TO_BE_REPLACED

Posted by The Brown Paper Blog on July 8, 2011 in Hot Tickets, New York

BPT’s Guide to the Fourth of July!

It’s America’s birthday this weekend. What are you doing? We got an event for every type of American out there no matter where you’re at so peruse our admittedly incomplete list of events and see what sparks your interest. Just be careful not to blow a finger off!

Every Friday at noon, EST, Brown Paper Tickets will post upcoming events happening in the New York area. Here are hot tickets for events coming up. Check back for stellar events that fit the interests of locals and tourists alike.

Friday, July 1 Start Trekkin Start Trekkin, NYC’s only fully improvised long-form comedy show based on the original series of Star Trek, is having it’s final show Friday the 1st of July at the PIT NYC.

Posted by The Brown Paper Blog on July 1, 2011 in Hot Tickets, New York