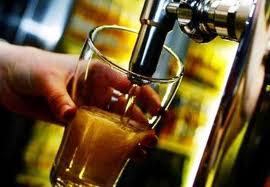 We’re nearing the end of “resolution month” when everyone starts hitting the gym, watching what they eat and curbing their alcohol consumption in an attempt to feel healthier and rejuvenated after the excess that is the holidays. As a result, we’re starting to see more food and beer events starting to pop up all over the country because, let’s face it, life’s too short to deny yourself your vices for too long! It’s all about balance, right?

For all you craft beer lovers out there, we’ve thrown together a list of some of the excellent beer festivals, beer dinners, classes, pub crawls and tours going on around the country this week. If one of these events is in your neighborhood, get out there and sample some. You’ve been good all month, you deserve it! END_OF_DOCUMENT_TOKEN_TO_BE_REPLACED

Now that you’ve all recovered from the holiday madness of last weekend, it’s time to start planning for your New Year’s Eve. We scoured our list of New Year’s events and picked out some choice events that aren’t sold out and are sure to appeal to a large variety of tastes. We got plenty of burlesque and cabaret, tons of music events featuring everything from electronic, reggae and hip hop to punk rock, metal and polka, a few food events, a healthy smattering of comedy and one event that describes itself as “a post-apocalyptic disco fantasy at the end of the world.” We started as far west as we could go (Kealakekua, Hawaii) and headed all the way to the Big Apple. So, no matter where you call home, there should be something relatively close to you.

Not planning on going out? Got your own New Year’s tradition that doesn’t involve battling crowds of drunken revellers? Let us know what your tradition is in the comments section!

But, for those of you that have to get out of the house and party, here’s our picks. Enjoy! END_OF_DOCUMENT_TOKEN_TO_BE_REPLACED