TONIGHT! Friday, January 6 I Beer School: Taste the draft and learn the craft  Class includes 6 selected samples of Jimmy’s constantly rotating drafts and receive an informative session on each beer, history of beer styles and general beer knowledge and anecdotes. Hosted by a Jimmy’s No. 43 beer specialist.

Saturday, January 7 I No Sleep Till Brooklyn  YB, Electronic-Chaos, Jason R Burner & Dragon Entertainment continue a brand new underground dance music monthly experience. NO SLEEP TILL BROOKLYN! It’s time to come together as one. Four rooms, multiple genres and multiple scenes under one roof. No matter what your style, no matter what your scene, it’s our scene….the dance music scene. This monthly is for all, young and old, the clubber and raver, the burner and the human. For the hundreds that attended Round One, wait until you see what’s in store for Round Two. END_OF_DOCUMENT_TOKEN_TO_BE_REPLACED

Posted by The Brown Paper Blog on January 6, 2012 in Hot Tickets, New York

Happy 52nd Birthday to the Discothèque

The discothèque has become such a major part of our nights out that we tend to think that they’ve always been around. But there was a day, long ago, when people would go out to dance to actual bands! When folks in the 40s would go to a club and listen to music, they weren’t listening to records, there was a group of living, breathing musicians in the corner cranking out their favorite hits. While many musicians will argue the fact that spinning records is as much of an art form as playing an instrument, the fact remains, people love dancing to records spun by a top-notch DJ. 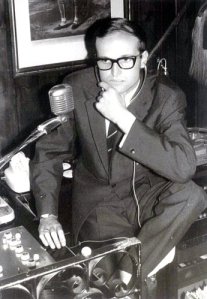 DJ Heinrich and his rig.

Today marks the 52nd birthday of the discothèque. Like many origin stories, the discothèque came into existence largely by accident. On October 19, 1959, The Scotch-Club, a restaurant in Aachen, Germany re-opened as a dancehall. The owner didn’t want to hire a band so he used a record player instead. On the opening night, the audience was quickly becoming bored with the record player format so, Klaus Quirini, a newspaper reporter covering the event, took over the record player and spiced things up by announcing the songs, throwing in his own witty comments and encouraging the audience to participate in games. The night was a hit and word began to spread outside of town about Klaus and his unique record-spinning technique, making Klaus, unwittingly, the world’s first DJ. The Scotch-Club therefore became the world’s first discothèque and DJ Heinrich, as Klaus then became known, inspired others to follow suit. He even encouraged DJs to organize a workers’ union, turning disc jockeying into an official profession. END_OF_DOCUMENT_TOKEN_TO_BE_REPLACED