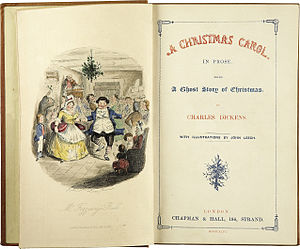 Charles Dickens’ holiday classic “A Christmas Carol” was first published on this day in 1843. We celebrate the story’s 168th birthday today! Dickens wrote the book during the early Victorian era when England was experiencing a renewed interest in forgotten Christmas traditions and when new traditions such as the Christmas tree and Christmas cards were starting to gain popularity. The story was an immediate success and has never been out of print since it was first published so many years ago. It’s also been adapted to the stage, film, opera and a whole host of other media, including this condensed, customizable eCard version courtesy of the folks at JibJab. END_OF_DOCUMENT_TOKEN_TO_BE_REPLACED

Every Thursday at noon, EST, Brown Paper Tickets posts upcoming events happening in the Boston area. Here are hot tickets for events coming up. Check back for stellar events that fit the interests of locals and tourists alike.

Posted by The Brown Paper Blog on December 15, 2011 in Boston, Hot Tickets

Starts Friday, November 25 I Charles Dickens Begrudgingly Performs “A Christmas Carol.” Again. In 1853, ten years after having dashed off his surprisingly successful holiday story, “A Christmas Carol,” Charles Dickens gave his first public reading of the work. The effort was so well received, as well as providing much needed cash, that he continued to perform these celebrated readings for the rest of his career. Now, almost 160 years later, performances of “A Christmas Carol” have become one of our most enduring holiday traditions. The only problem is that Dickens himself has long grown tired of this annual reading. Reports of his death in 1870 were greatly exaggerated, and year after year he has sustained himself with these solo performances albeit with dwindling enthusiasm as he has moved from the grand concert halls of London to finally, this year, The Building Stage in Chicago’s industrial West Loop. Now, facing his 200th birthday, Dickens has reached the breaking point. He knows he must grant the holiday wishes of his audience but desperately hopes to entertain them with anything but another performance of “A Christmas Carol.” END_OF_DOCUMENT_TOKEN_TO_BE_REPLACED

Posted by The Brown Paper Blog on November 23, 2011 in Chicago, Hot Tickets