Leche de Tigre love to play theaters where the crowd has space to dance and this Hawaiian Latin Gypsy funk band definitely know how to get people on their feet. The 8-piece group originated in 2009 in Kona, Hawaii. Blending Caribbean rhythms with Eastern European, tango and rock influences, with a dash of bossa nova, Leche de Tigre created a unique style that has attracted a strong following over the years.

Their favorite show they’ve ever played took place in September at Aloha Theatre. They said, “The place was full, the sound was good, and the vibe was fantastic. [There was] a great crowd up and dancing.” This New Year’s Eve, the band returned to the Aloha Theater and judging from this video, this show was no different. END_OF_DOCUMENT_TOKEN_TO_BE_REPLACED

Posted by calbrownpaper on January 18, 2012 in Music 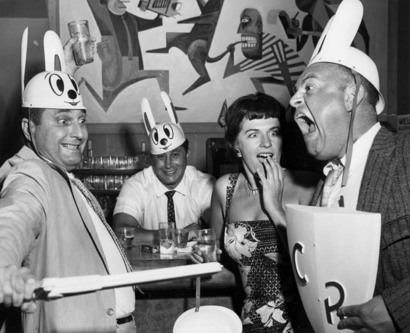 Now that you’ve all recovered from the holiday madness of last weekend, it’s time to start planning for your New Year’s Eve. We scoured our list of New Year’s events and picked out some choice events that aren’t sold out and are sure to appeal to a large variety of tastes. We got plenty of burlesque and cabaret, tons of music events featuring everything from electronic, reggae and hip hop to punk rock, metal and polka, a few food events, a healthy smattering of comedy and one event that describes itself as “a post-apocalyptic disco fantasy at the end of the world.” We started as far west as we could go (Kealakekua, Hawaii) and headed all the way to the Big Apple. So, no matter where you call home, there should be something relatively close to you.

Not planning on going out? Got your own New Year’s tradition that doesn’t involve battling crowds of drunken revellers? Let us know what your tradition is in the comments section!

But, for those of you that have to get out of the house and party, here’s our picks. Enjoy! END_OF_DOCUMENT_TOKEN_TO_BE_REPLACED