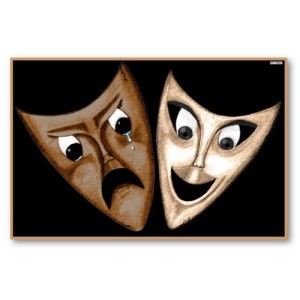 Hello! I am the Theater/Education Doer. I am presently working on a new project that will allow young people to tell their personal stories on the stage via art, poetry/prose, song, physical enactment, etc. Here is the extended version of my mission:

When I was a teenager I was involved in the drama program at my high school. There was a class that I particularly enjoyed called Children’s Theatre. During this class, the high school kids would walk over to the local elementary school and consult the librarian regarding which books were the most popular that year. There would always be some old classics (If You Give A Mouse A Cookie, Where The Wild Things Are), but there would often be newer stories as well (The Stinky Cheese Man, Snot Stew). We would check these books out from the library and bring them back to the theatre with us, where we would then work on transcribing the stories into one-act plays for the stage. After reading through the scripts as a class, we would vote on which stories we wanted to perform, and then (after several rehearsals) we would spend a day or two traveling and performing for various local elementary schools. The kids loved seeing their favorite stories on stage and we were “drama geeks,” happy to perform for any audience (and the fact that we were released from school for the day on a field trip didn’t suck, either). Our end-of-year project consisted of our class pairing up with a class of 3rd graders, two 3rd graders per drama student. Here we had the opportunity to show the kids how to do what we had done – we helped them pick a story, re-write it for the stage, and directed them as they assumed their very first roles as actors. This was one of our favorite projects to work on, the kids would always remember us each year and the parents loved it.

Fast forward to the present-day. I have been working with a local homeless and foster youth advocacy group through my Doer-isms at Brown Paper Tickets. Initially, I began helping them distribute their monthly newsletter. A few months after I began volunteering with them, I attended their (amazing) 10th Anniversary benefit luncheon at the Sheraton hotel in downtown Seattle. The youth who presented their stories on the stage that afternoon – in a room filled with hundreds of state legislators and supporting organizations – were incredible. What struck me the most was the strength, bravery and willingness to share that these young people brought with them to the event. Standing before us were a group of youth who have individually endured unspeakable difficulties in their lives, marginalized and nearly silenced by a complicated and very flawed system. Their spirits unwavering, they have chosen to speak out about the injustices in the world around them, working for positive change and educating other young people in similar situations who may not be aware of their own rights.

It is no secret that the voices of youth tend to be disregarded in our society. Young people are often socially lumped into the category of “teenager,” a word in this context usually connoting naivety, immaturity and irresponsibility. Sometimes the word “dangerous” can even be tacked on to the stereotype. Immersed in what can sadly feel is a disinterested culture, it seems as though there are not adequate avenues for youth to tell their stories to a public who will listen, care, and try to understand what it means to be a minor. For example, I would have had no way of knowing the stories that the Mockingbird youth had to tell had I not been in the right place at the right time to hear them at that luncheon – and I volunteer with them regularly. This is through no fault of the organization – it simply is not the focus while I am there to discuss our personal lives; we are there for the newspaper distribution.

Backing up for a moment: While I was working toward my BA, I became involved with the college literary magazine. This was a fun workshop-esque class based on publishing a bi-annual literary journal, punctuating each publication with a release party involving stage performances and various readings. Remembering these performances, my initial thought after attending the recent luncheon had been to contact the editor of the magazine and ask him if he would be willing to run a contest culminating in the opportunity for some of the Mockingbird newspaper staff to have a creative piece or two published in this nationally distributed, university sponsored magazine. He graciously agreed, taking the idea a step further (as he is wont to do), bringing up thoughts on the stage, self-publishing, etc.

Next I met with Kelly, the manager of the Doers at Brown Paper Tickets. We also discussed the topics of stage and self-publishing, and she reminded me of something so blatantly obvious that I had never even considered it: I have a plethora of resources available to me through the company. Printed materials, venues, a budget, marketing, all things theatre, etc. I emerged from this meeting feeling overwhelmed by the possibilities and deeply, deeply inspired.

Finally I met with another youth advocate in the community, and apropos of nothing – I hadn’t brought it up at all – he suggested collaborating on an event involving stage performances. Alright, Universe! Thank you for the clue-x-4, the stage it shall be! This person also offered to put me in touch with representatives from an astounding amount of additional youth-centric organizations, expanding my pool of participants across a wider demographic of young people.

There have been many meetings in the meantime with various individuals, but that is the basic story of how the egg of this project was laid.

(Seattle isn’t the only city with projects like this! Here is video footage of a similar theatre group in Washington DC, working with Latino youth.)

Everybody has a story to offer, an experience to share, an allegory to tell. In this series of interactive seminars and workshops, we will delve into the creative depths to bring our stories into the spotlight. Express yourself through written word, art, dramatic enactment, song, or just about any other artistic measure you can think of. Don’t know how to do it? We will teach you. Don’t think you can learn? We will prove you wrong. Your stories will be woven together to create an 80 minute performance piece, and each accepted narrative will be published in nationally distributed KNOCK literary magazine.

Revenue generated from ticket sales will go directly to the creation of a self-published literary magazine – written by the youth, for youth.

Over the past few weeks I have been working on time lines, contact lists, finalizing my proposal, etc. Obviously there will be a lot to learn along the way, but that’s half of the fun!

So, fingers crossed. Here we go…