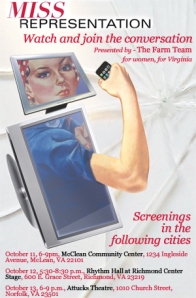 Sita Kaulesar Sukul, the Brown Paper Tickets Film Doer, is introducing a new service, actively promoting non-theatrical film releases. One of the current films speaks to the misrepresentation of women. Here’s Sita explaining a little bit about the film.

“The media can be an instrument of change: it can maintain the status quo and reflect the views of the society or it can, hopefully, awaken people and change minds. I think it depends on who’s piloting the plane.”

It is time to make a difference through film. I have stepped up and become part of an incredible movement to change the face of women and girls in our media. As a Social Action Rep, my job is to help empower women and girls in our world and for the next few months I will be receiving special intern assignments from the people behind Miss Representation. I’ll be taking the inspiration that the film-makers sparked in me and put it into action. One of my first goals is to spread the word by promoting this film and help you share this very important movement with the people that you know.

There are a few things that folks out there can do right now to take action and spread the word :

1. Host a screening and make some noise! Want to learn how to host a screening? You can contact me and I will assist you: or you can visit the Miss Representation website.

3. Visit missrepresentation.org and take the pledge!

5. Visit the site and upload a short video clip telling the media how you want to be represented. In response to the media’s misrepresentations, the Represent Us campaign has been launched – create your own media messages at their website and eventually we will have a wall of thousands and be heard!